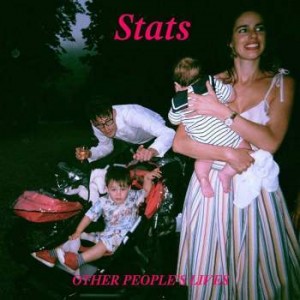 “If there was a mission it was to create something like absurd office funk,” says Stats’ Ed Seed, recalling the birth of his band. He was working a series of banal London office jobs, but rather than switch off or despair, Seed used this conventionally sterile backdrop for creative inspiration. “It was about taking things that are considered boring or are overlooked,” he says. “If you stare at anything long enough, it becomes weird.”

Staring into the infinite oddness of office life was interrupted when Seed “fluked” his way into La Roux’s band - which itself proved a further inspiration for the evolution of Stats. “I'd always been in scrappy indie bands,” he recalls. “Then I met Elly and her crew and thought ‘wow’. This kind of pop music, I always thought it only happened over in Hammersmith, you had to have tens of thousands of pounds and a major label. But I realised you didn’t need a huge budget to make something more stylish than your average band.”

This was a turning point for Seed, recognising he could create his own contemporary version of DIY art pop. “That gave me confidence,” he reflects. “I wanted Stats to be quite theatrical. I wanted it to be strangely glamorous, in a Roxy Music or Pet Shop Boys sort of way. Something that’s glamorous and quite silly. Those bands are very serious about being very silly.”

Debut album “Other People’s Lives”, recorded at RAK studios with the full Stats band (Ed Seed – vox, guitar, John Barrett -drums, Stu Barter - bass, Duncan Brown - guitar, Nicole Robson – keyboards, Iso Waller-Bridge – keyboards, vox) is about investigating the gaps in the stories we tell about our lives. Says Ed, “the world encourages me to experience my life as a narrative: a story in which I am the lead character, going on a journey, moving towards the discovery and realisation of an authentic self. Other people’s lives are presented to me as coherent, relatable stories, full of passion and travel and wonder. But my story makes no sense: it is full of contradictions and formless subplots, and I barely feel like the same actor from one day to the next - let alone find any meaning in it.”

Musically Other People’s Lives is in many ways a time-stamp of a record, something that captures the now, the fleeting, the fickle and the forgotten – like that perfect moment lost on the dance floor. Yet the album avoids being tied to a time and place, ricocheting between 70s art rock, 80s synth grooves and cosmic disco, presented honestly and experimentally via the all-encompassing prism of pop music.

Patrick says: Duncan from Dutch Uncles hipped me to Stats a few months back (Memphis Industries fam innit), and I was on board instantly. Following the same absurdist pop route as Fujiya & Miyagi or Yacht, but with a touch of Roxy Music glamour, some Talking Heads vocal nods and a whole lot of DFA-style indie dance grooving, Stats are 2019's answer to Hot Chip, Metronomy and Holy Ghost.