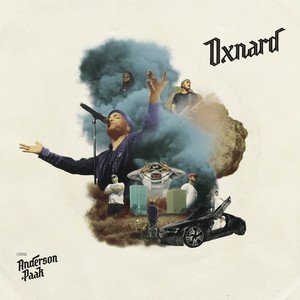 More than just a detail, the “.” in Aftermath’s Anderson .Paak’s name is a shot fired, putting the world on notice of an artist unlike anything the twenty-first century has ever seen. With a soulful essence harkening back to the iconic voices of the seventies, yet embodying a raw uniqueness fully present in the now, the acclaimed singer/rapper/drummer/producer has successfully alchemized a cross-section of musical styles – R&B, hip-hop, and dance – into a solid, undeniable, irresistible “genre-less sound.” A rabid worldwide fan base, praise from critics at outlets including Rolling Stone, Billboard, New York Times, and Pitchfork, and electrifying appearances on talk shows including Ellen, The Late Show with Stephen Colbert, The Tonight Show Starring Jimmy Fallon and at festivals around the globe have all cemented .Paak’s place as one of the most premier artists on the music scene today.

Born Brandon Paak Anderson in Oxnard, California, his extraordinary talent was fully realized under the name Anderson .Paak with his debut Venice and a stellar six-song run on Dr. Dre’s certified Gold COMPTON album, culminating in the perfect storm of his sophomore release, 2016’s Malibu. A seamless tsunami of soul-stirring, body-shaking, infectious and deeply-personal songs with features by artists such as ScHoolboy Q, The Game, Talib Kweli and power producers including 9th Wonder, Robert Glasper, Kaytranada and more, Malibu was met with universal rave reviews, major nominations, including Best New Artist and Best Urban Contemporary Album Grammy nods, and a hail of award wins. In late 2016, .Paak and producer Knxwledge – as the duo NxWorries - released the album Yes Lawd!, reaching #3 on Billboard’s Top R&B/Hip-Hop chart.

With impressive collaborations with acts such as Mac Miller (whose song Dang! featuring .Paak was certified Gold), a stream of requests to work with renowned artists, and instantly recognizable hits in national ad campaigns, popular television shows, and on the big screen, .Paak is now ready for his next major move with the release of his highly-anticipated first album on Dr. Dre’s Aftermath label.

The world can hardly wait...