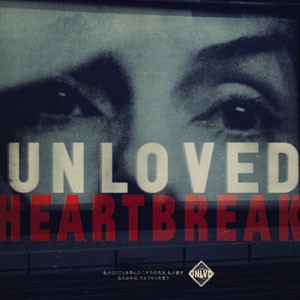 “Sometimes it’s hard to say how you feel,” says Jade Vincent. “These songs are vulnerable stories for me to tell — they’re things I couldn’t say out loud. But I found that I could sing them. And then I closed my eyes when they would listen.”

Listening to Vincent’s songs were her partner, the producer/composer Keefus Ciancia, and the DJ and producer/composer David Holmes. Together, Vincent, Ciancia and Holmes make up Unloved, the musical project that evolved out of a late-night Hollywood bar in 2015, released a stunning debut album the following spring, and this year crafted the soundtrack to Phoebe Waller-Bridge’s acclaimed new series Killing Eve.

Now Unloved bring us their second full length record Heartbreak, a record emboldened by its predecessor to be more emotionally exposed, more musically, lyrically, and vocally audacious. In the words of Holmes: “We just get together, had a load of ideas, and Jade went off and wrote and wrote. She got deep and deep. She has an amazing story. They are amazing songs. She excelled herself.”

To enter the world of Unloved is to surrender oneself to a great musical immersion, one that seems to occupy the space somewhere between past and present, where thoughts soften and ideas mingle with twisted mancini-esque orchestrations, where music binds the dawn and dark.

Barry says: Killing Eve, and it's tense atmospheres but dark humour flecked throughout wouldn't have been the same without Unloved's perfect soundtrack. Heartbreak may seem mildly chaotic at first, but brilliantly evocative orchestration and swooning, loungey vibes soon make you foret the chaos before flinging you once again into the fire. A beautifully produced and perfectly balanced filmic masterpiece. And who would have expected any less from this talented bunch?