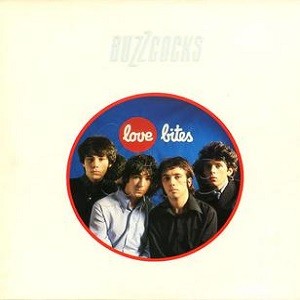 Behind the chocolate box cover, Love Bites is an album of paradoxes if not clashing opposites: real/imaginary, past/future, love/lust, connection/alienation, commerciality/experimentation. It’s to the group’s credit that they walk the high wire with ease: the attack is less punk, more measured and on occasion psychedelic, as befits the perceptual and philosophical nature of Shelley’s lyrics. The glossy pop star photo on the sleeve is matched by stranger photo realist portraits on the inner, by Robin Utracik of the Worst: Shelley in particular looks dishevelled, having just vomited when the source photo was taken.

Love Bites hit its moment. The reviews were good, and so were sales: it reached number 13 in the album charts, Buzzcocks’ best showing. They immediately went out on their fourth tour, Beating Hearts - supported by Subway Sect - which was marked in this year of Sham 69 by skinhead violence and stage invasions, definitely not what Buzzcocks were about. The fifth single of that year had already been recorded: ‘Promises’ and ‘Lipstick’, the latter of which used the same riff as Magazine’s debut ‘Shot by Both Sides’. Buzzcocks had reached their commercial peak, but Pete Shelley was deeply troubled.

Late 1978 was a harsh place, with competing styles and fads and the relentless pressure of rapid fire novelty that punk had set up. The pace was killing and on top of that the impetus of 1976 punk had faded. Shelley also felt that the original sense of community had gone: “Once we were in the music industry, people had become more diversified, there was nothing really to pull people together again.” More importantly, the constant touring was driving him mad: “It was a bit unnerving. When we did the Love Bites tour I was convinced by Richard not to leave the band. It was all getting too much for me.”