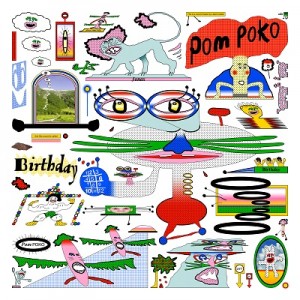 Pom Poko are Ragnhild (lead vocals), Ola (Drums), Jonas (Bass) and Martin (Guitar). The 4 met whilst all studying at the Trondheim Music Conservatory in Norway and quickly garnered interest from a wider audience as they began playing and writing together. The group cite a range of influences for their unique sound, including “(West)-African music like Oumou Sangaré and Ali Farka Touré; indie bands like Vulfpeck, Palm and KNOWER; noisy high-energy bands such as Hella and Death Grips; and music with interesting lyrics such as Jenny Hval and Nick Drake.” But you’d struggle to pin them down to one or two forebears, given their resistance to anything resembling a prescriptive approach.

Speaking about the origin of their name, which taken from one of the more vigorously outré films by Japanese animation visionaries Studio Ghibli, the band explain, “The Pom Poko film captures a lot of what we'd like our concerts to be: high energy, fast pace, lots of stimulus for eyes and ears – and most importantly, really crazy and fun. The movie is basically the time of your life for two hours, and afterwards you're in some state of exhausted ecstasy. Plus the raccoons in the movie, and raccoons in general, are really badass.”

The band’s own bad-ass-ery is writ large on album opener ‘Theme1’, which locates a sweet spot between Deerhoof and Battles as singer Ragnhild issues loud, clear rebel yells over Martin’s math-rock guitar. Singles ‘My Blood’ and ‘Follow The Lights’ layer seductively sweet melodies over squalls of sound, while the funk-fired ‘My Work Is Full of Art’ offers a kind of mission statement: “I’ll just let freaky surround me,” sings Fangel.

Elsewhere, Pom Poko’s instinctive dynamism teases uplifting thrills from boundary-melting experiments. Glacial shards of guitar bounce off steel-drum flurries on the rapid-fire serotonin fix of ‘Blue’, before the sweetly infatuated ‘Honey’ comes sequenced next to the thrashing tonal lurches of ‘Crazy Energy Night’. The sing-song title-track spikes the ranks of sweetly sad birthday songs with a rebellious sting (“I’m not your bitch!”), while ‘Daytripper’ is a commanding come-on from a band who are no more likely to mince their words than limit their range. ‘If U Want Me 2 Stay' resembles ‘The Tra La La Song’ retooled as a sci-fi cyber-pop anthem of carefree defiance, while ‘Peachy’ closes the album with an exultant melody and one last declaration of transformative independence: “Watch me as I shape shift.”