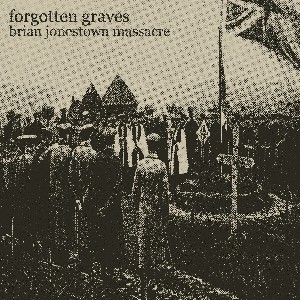 The first track is "Forgotten Graves" (which is exclusive to this release) & the second track is “Tombes Oubliées” with Rike (Friedrike) Bienert providing the vocals which is off the forthcoming self titled BJM album. With Sara Neidorf on drums , Hakon Adalsteinsson on guitar & Heike Marie Rädeker on bass supporting Anton Newcombe in these sessions that were recorded between December 2017 & January 2018 at Cobra Studios in Berlin . The band have just completed successful tours of the USA ,Canada , Australia , New Zealand & Europe . "Forgotten Graves" is released in the same month as the world commemorates the hundredth anniversary of the World War 1 (“the war to end all wars”) , this war never ended any other war & more forgotten graves are being added every day.

SIDE A - Forgotten Graves
SIDE B – Tombes Oubliées