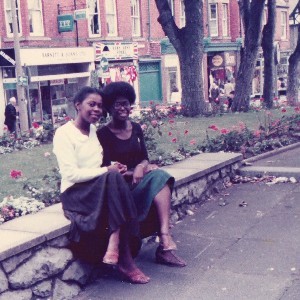 The Daydream Library Series of records and tapes is the independent house label of Thurston Moore (Sonic Youth) and Eva Prinz’s publishing imprint Ecstatic Peace Library (www.ecstaticpeacelibrary.net) The Daydream Series was established in 2018 to provide a label for emerging musicians, both local and international.

‘Sistahs’ is an optimistic album about friendship, melancholic memories, and the belief in a modern future. Eva & Thurston discovered Big Joanie playing live supporting The Ex in Islington (London) earlier this spring and ran to the merch table to discover the band didn’t have a record with all the songs that had just mesmerized the audience.

BIG JOANIE are Stephanie Phillips (singer/guitarist), Estella Adeyeri (bass) and Chardine Taylor-Stone (drums). The band formed in 2013 and released their first EP ‘Sistah Punk’ in 2014 and the single ‘Crooked Room’ in 2016. As part of London’s thriving DIY punk scene BIG JOANIE have played with locals Shopping; toured with US punks Downtown Boys; and Dutch Punk band The Ex; and performed at the first UK Afropunk festival. Inspired by The Ronettes, Nirvana, Breeders and Jesus and Mary Chain, Big Joanie have described themselves as being “similar to The Ronettes filtered through ’80s DIY and Riot Grrrl with a sprinkling of dashikis.” Big Joanie recorded ‘SISTAHS’ over several sessions from November 2017 to January 2018 at Hermitage Works Studio with producer Margo Broom. The album title derives from the band’s belief in sisterhood and female friendship. One of the main reasons for coming together was to create an atmosphere to be “completely ourselves as black women and discover what was possible to realise in those spaces.” The album cover features Steph’s mum Joan, whom the band is named after, and her aunt on holiday in Wales. Outside of the band all three members are involved in communitarian activities whether running the festival for punks of colour Decolonise Fest, volunteering at Girls Rock Camp, or leading the Stop Rainbow Racism campaign which works to stop racist performances in LGBT venues. SISTAHS