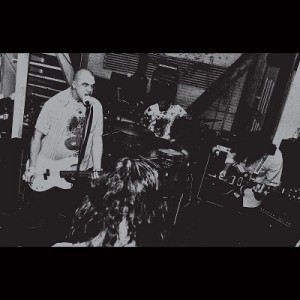 NYC’s The Men have made a name for themselves as wayfaring musicians, constantly evolving and eluding their listeners. Before they were genre-hopping through country, post-punk, noise rock, and more, they were applying that experimental nature within the more confined space of punk. Within that genre they were wildly adventurous, playing noise shows, hardcore shows, rock shows, and switching up the instrumentation as they saw fit, while always operating within a general punk ethos. Their first demo was a hand-dubbed and spray-painted run of 32 copies, half of which worked, and their first shows were at New York dives like Tommy’s Tavern, Matchless, and Don Pedro (all of which have been shut down).

That hand-dubbed demo kicked off a furious run of creative output from 2008 to 2011, much of which is now collected on the new compilation, Hated. The songs on Hated are pulled from a variety of sources — the debut demo tape, a split with Nomos, a 7", a 12" EP, and a slew of unreleased demos, outtakes, and live recordings. These songs show the huge range and potential of a band still in its infancy, when they were just beginning to blaze the path they’re still on to this day.

The core value of the original incarnation of The Men was work ethic. The band became a lifestyle for original members Chris Hansell, Mark Perro, and Nick Chiericozzi, with Hansell even living off unemployment checks to dedicate his time to the project. The three of them would jam and obsess over music together over all else.

For those who were at those early NYC shows, Hated will be a welcome reminder of a glorious time in the underground. For those who weren’t, it’s a chance to experience The Men as the locals did, and to get a glimpse of a Brooklyn DIY scene that doesn’t really exist anymore, at least not in the same way. And for diehard fans of the band, it’s a reminder of how much they’ve evolved, and how much more evolution they still have to go.