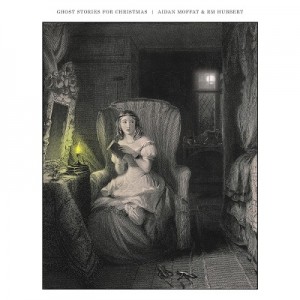 It’s the most wonderful time of the year! And in the old tradition, Aidan Moffat & RM Hubbert invite you to gather round the fire for Ghost Stories for Christmas.

The album began with an idea for a song – forthcoming single A Ghost Story for Christmas. Originally intended as a one-off, seasonal release, it proved such fun to write that soon they had enough songs for an EP. “Then, on a nice, sunny, summer morning, I phoned Hubby and suggested we just do a whole album,” says Moffat. The album also features their cover of Yazoo’s synth classic Only You, already a popular number in their live set and the cover versions is topped off with a sombre rendition of Mud’s 1974 hit, Lonely This Christmas.

Barry says: There really is no way i'd rather listen to Christmas songs than with these two Scottish legends at the helm. Possibly a little more upbeat that the Low offering, but similarly brilliant, these are tenderly delivered and well-considered ballads for any time of year. Beautiful stuff.

1. Fireside
2. A Ghost Story For Christmas
3. Desire Path (Baby Please Come Home)
4. Such Shall You Be
5. Lonely This Christmas
6. Weihnachtsstimmung
7. The Fir Tree
8. Only You
9. Ode To Plastic Mistletoe
10. The Recurrence Of Dickens