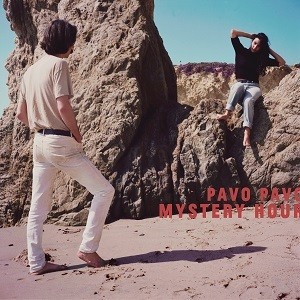 Pavo Pavo is the recording project of Oliver Hill and Eliza Bagg. On their acclaimed 2016 debut, Young Narrator in the Breakers, Eliza’s effervescent soprano was compared to “a lovelorn alien reaching out from the farthest reaches of the galaxy” (Pitchfork), and the elegant, symphonic arrangements were described as “weightless pop that sounds like it was beamed down from a glimmering utopian future.” (Stereogum).

The album began as a means to process the breakup and became a feedback loop, influencing the alchemy of their separation process and informing their new roles in each other’s lives. Recurring sounds and instruments act out the shifting storylines of these characters across the album: Oliver’s pitch-shifted vocals and high melodic synths are a distorted, imperfect replacement for Eliza’s floating soprano voice, and cascading strings are an intentional soundtrack for romantic melodrama.

The tone is set by the album’s title track and lead single, a tightly built pop song driven by orchestra and choir into a celestial fadeout: I realize love is to see every side of you / but mon cheri I'm designed to be unsatisfied.

At the heart of the music is the openness with which the duo continues to sing together, revealing their unshakeable friendship. The record is a meditation on relationships from different angles: “Goldenrod” ends the album with a duet about loss, the expressiveness of the two voices garbled to make them sound uncanny, almost inhuman. “Close to Your Ego,” (Hold me close to your ego / and I’ll hold you close to mine) is more oblique, about the difficulty of reconciling intimacy with sense of self.

Their journey began at Yale University, where the duo both studied music – they met playing in the same string quartet. Since that time, Eliza and Oliver have become prolific and vital collaborators at the intersection of classical, experimental and pop music. As a soprano, Eliza has worked closely on new music with Meredith Monk, Julianna Barwick, John Zorn, Caroline Shaw, and Ben Frost. Oliver has arranged strings for tracks by the Dirty Projectors, Helado Negro and Wet, and is a member of Kevin Morby and Vagabon’s touring bands.

“The beach is an image that keeps coming back to us – the edge of the world, with the possibility of exiting it,” Oliver says. “The idea for this cover is that it builds on the Young Narrator cover, with two figures casting long shadows on the beach. That cover was a collage and this is a photograph, the hi-res, come-to-life version.”