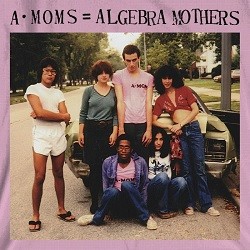 The Algebra Mothers/A-Moms were formed by four like-minded misfits/artists/musicians/friends (Gerald Collins, Ralph Valdez, Diana Balton and Kirsten Rogoff) from Detroit’s Cass Tech High School. They made their professional debut in 1977 and in 1979 they released the weirdly incredible Strawberry Cheesecake b/w Modern Noise 7” on their own Aftertaste Records (TMR re-issue imminent). They played around Detroit and the country with everyone from Destroy All Monsters and Sonic’s Rendezvous Band to Pere Ubu until 1984.

Several decades later, Third Man Records contacted head Mothers Gerald Collins (Jeecy and The Jungle) and Ralph Valdez (former WDET Disc Jockey) and discovered they were sitting on at least an album’s worth of home studio demos and live recordings. Now we proudly present to you “A-Moms = Algebra Mothers” LP, 14 never before heard tracks recorded between 1977-1984 in various home studios and clubs. It will be their first release in nearly 40 years and only their second release ever.