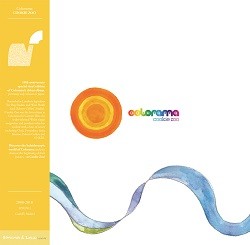 For the last decade, and almost secretly, Carwyn Ellis records have meant the greatest news for people who love pop with no labels, nor affiliations. People who, after a record-hunting afternoon, enthusiasticly arrives back home with findings like Françoise Hardy LPs from the Vogue era, Arthur Verocai, Broadcast reissues, an Alessandro Alessandroni soundtrack, Meic Stevens' "Outlander" and an original, mint condition, O'Jays' "Back Stabbers" LP.

Ellis has proved to be plenty of tools and talent to sum up, in forty minutes, all the magic of the best pop music recorded in the last fifty years, very well absorved and excitingly mixed, and steeped by a magic and pastoral halo from his native Wales.

Before Edwyn Collins decided that Carwyn had received much less attenction than what he deserved, and supported in his label AED two wonderful records like "Good Music" (2012) and "Temari" (2014), Ellis had already recorded the "Magic Lantern Show" EP (2009), the acclaimed by Shindig magazine, "Box" (2010); and this first album, "Cookie Zoo" (2008).
A debut, after his thirties, where we can find all his personal universe. "Cookie Zoo" is linked to "Dere Mewn", one of the most beautiful songs recorded in the United Kingdom in the last decade. An unique flower living in a botanical garden, filled with brilliant songs of all possible colours.

Laura says: I can't believe it's 10 years since this album came out. I remember trying to track down a vinyl copy, after buying "Sound" on 7" (still one of my favourite singles of all time). At the time it was only available in Japan and out of my price range, so I'm delighted to finally get my hands on it. It's a gem of a record: gentle, intricate, melodic pop. Perfect!