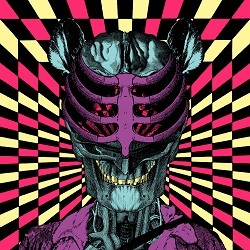 Here we have OCS - recorded Live, at The Chapel, San Francisco, CA in December 2017 to be exact. OCS played four shows in California last December, raising funds for charity, and also enabling OCS to play out the tracks from the (then) recently released album "Memory of a Cut off head". Bandleader John Dwyer assembled his ensemble for these shows with players from the album and current Oh Sees members also, including Brigid Dawson, Emily Elkin, Eric Clark, Heather Lockie, Heidi Maureen Alexander, Paul Quattrone, Tim Hellman, and Tomas Dolas.

The shows sold out in a trice, and thankfully one of the San Francisco shows were recorded by Eric Bauer, Dwyer mixed the record and it was passed onto old friends the Austrian Label ROCK IS HELL (Oh Sees fans will note early releases by Thee Oh Sees appeared on Rock is Hell a whiles back).

Initially released (and long sold out) as a silk screened 4 LP set with some incredible artworks by Elzo Durt (he did the art for the Carrion Crawler / The Dream EP ).. Dwyer /Rock is Hell decided to make a more widely available 2LP version.