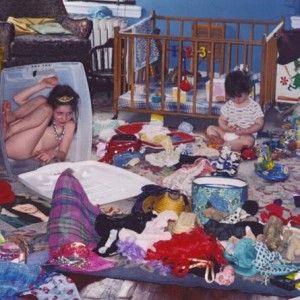 Remind Me Tomorrow comes over four years after the release of Are We There, a top 10 critically praised album of 2014, and reckons with the life that gets lived when you put off the small and inevitable maintenance in favor of something more present. Throughout, Van Etten veers towards the driving, dark glimmer moods that have illuminated the edges of her music and pursues them full force.

Written while pregnant, going to school for psychology, after taking The OA audition, Remind Me Tomorrow was written in stolen time: in scraps of hours wedged between myriad endeavors — Van Etten guest-starred in The OA, and brought her music onstage in David Lynch’s revival of Twin Peaks. Off-screen, she wrote her first score for Katherine Dieckmann’s movie Strange Weather and the closing title song for Tig Notaro’s show, Tig.

The songs on Remind Me Tomorrow have been transported from Van Etten’s original demos through producer John Congleton’s arrangement. He helped flip the signature Van Etten ratio, making the album more energetic-upbeat than minimal-meditative. The songs are as resonating as ever, the themes are still an honest and subtle approach to love and longing, but Congleton has plucked out new idiosyncrasies from Van Etten’s sound. Joined by Van Etten’s longtime collaborator and bandmate Heather Woods Broderick, plus Jamie Stewart, Zachary Dawes, Brian Reitzell, Lars Horntveth, McKenzie Smith, Joey Waronker, Luke Reynolds, and Stella Mozgawa, Remind Me Tomorrow was recorded at studios throughout Los Angeles.

For Remind Me Tomorrow, Van Etten put down the guitar. When she was writing the score for Strange Weather her reference was Ry Cooder, so she was playing her guitar constantly and getting either bored or writer's block. At the time, she was sharing a studio space with someone who had a synthesizer and an organ, and she wrote on piano at home, so she naturally gravitated to keys when not working on the score - to clear her mind. Lead single “Comeback Kid” was originally a piano ballad, but driven by Van Etten’s assertion that she “didn’t want it to be pretty,” it evolved into a menacing anthem. Remind Me Tomorrow as a whole shows this magnetism towards new instruments: piano keys that churn, deep drones, distinctive sharp drums. There are dark intense synths, a propulsive organ, a distorted harmonium.

The breadth of Van Etten’s passions (musical, emotional, otherwise), of new careers and projects and lifelong roles, have inflected Remind Me Tomorrow with a wise sense of a warped-time perspective. This is the tension that arches over the album, fusing a pained attentive realism and radiant lightness about new love.

Laura says: “Sitting in a bar, I told you everything, you said ‘holy shit, you almost died’”. Album opener, “I Told You Everything” is a love song of sorts, and while it hints at her turbulent past it’s about trust, optimism and moving forward and marks a shift both musically and emotionally. The addition of synths and electronics, give a whole new dimension to her songs, at times providing rhythm and melody, at others a jarring tension and an air of menace. As ever her writing is deeply personal, but whereas previously the past was filled with regret and self doubt, this time around she reflects on it with an air of nostalgia and knowing. There’s still a sense of fragility when she writes about love, but you get the impression that she’s more at ease with her place in the world now and this has given her the confidence to write her most ambitious and assured album yet.