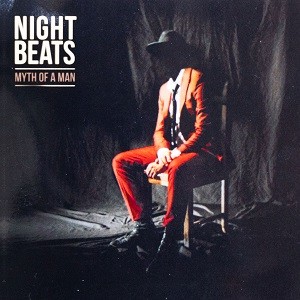 Fronted by Texan native Danny Lee Backwell, Myth Of A Man is Night Beats' fourth studio album, and their second for Heavenly Recordings following the release of Who Sold My Generation in 2016.

While Blackwell has always fed off the musical legacy of his Texas roots—Roky Erickson and the 13th Floor Elevators, The Red Krayola, The Black Angels and more paving the way for the the napalm-coated psych-rock headtrip of past albums—Myth Of A Man has him pulling from the surrogate wellspring of Nashville, Tennessee.

It was there that he worked with the eminent Dan Auerbach, and a murderer’s row of battle-worn session musicians—the combined weight of experience that comes from working with every legend from Aretha Franklin to Elvis not lost on Blackwell. “I was just humbled by being accepted,” he explains, “Big hearts all around.”

In short, it’s an album that holds its own next to the classics, less of the bloodshot acid trip of Sonic Bloom (2013) and Who Sold My Generation (2016) here, Blackwell has recalibrated them, slowed them down just enough and allowed them the space to breathe and exist as something new. It’s the same book, just a different chapter. The moody organ comps and slow stroll of the 12-string on “Her Cold Cold Heart” evoke the noxious feeling and hypnotic state of toxic love, the spirit of Bill Withers is flowing through the acoustic guitar and sun-soaked shuffle of “I Wonder,” and string-trimmed ballads like “Footprints” and “Too Young To Pray” evoke the imaginative, cowboy psychedelia of fellow Texan, Lee Hazlewood. “Let Me Guess” with its searing riff and Elevators-esque organ assures us that the scuzzy sound we know and love is alive and well, while “One Thing,” a song about being used and abused—or as Blackwell sharply puts it, “being rolled up and smoked”—has plenty of fuzzed-out guitars to let us know he might just be happy about it.

Written during a particularly destructive period of the band, the album is populated by fallen angels, blood-sucking wanderers, and vindictive lovers—sketches of people the band has surely come across during their cosmic roving through the underground—but the character most present is Blackwell, himself. “Myth Of A Man can be summed up as a personal display of vulnerability and guilty conscience,” he explains, “Destroying the mythos of what it means to live and function in society.” With its bold steps forward, Myth Of A Man serves as both a takedown and reintroduction of the band as we know it—the strongest evidence that you’ll never be able to pin Night Beats down.