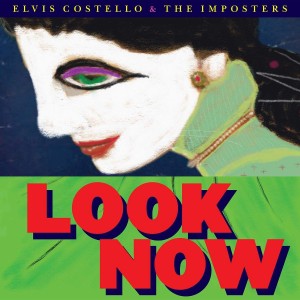 Elvis Costello and The Imposters – Steve Nieve (keyboards), Davey Faragher (bass), Pete Thomas (drums) – have made a sensational new album that ranks alongside the best work this singularly great artist has ever produced.

Recorded in Hollywood, New York City and Vancouver, British Columbia, ‘Look Now’ is beautiful in its simplicity, reflective in its lyrical vision, surrounded by melodies and orchestrations that are nothing short of heavenly. It’s the first album Costello has made with The Imposters since the 2008 release of ‘Momofuku’ and his first new album since the acclaimed 2013 Roots collaboration, ‘Wise Up Ghost’.

Anyone anywhere in the world who has seen Elvis Costello and The Imposters live can testify to their unmitigated swagger. Costello’s suspicion that it was time to return to the studio was confirmed while on the ‘Imperial Bedroom & Other Chambers’ tour of the USA, last summer and he realized the power and sheer musicality of The Imposters had never really been fully captured on one record.

The DecemberistsI'll Be Your Girl