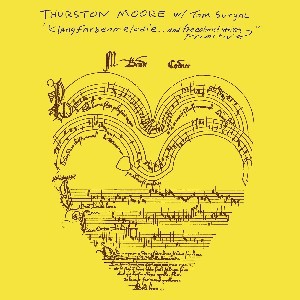 "A 1995 release from the famed Sonic Youth guitarist, this recording sees him paired with free jazz drummer Tom Surgal for a blistering noise set, in keeping with New Zealand noise label Corpus Hermeticum's aesthetic. The listener should not expect the sweet psychedelic pop of his Psychic Hearts album of the same year; rather, Moore explores his interest in freeform improvisation on this live set recorded in 1994. The recording is lo-fi, but that adds to it's candid charm, as his guitar thrashing reaches peaks of noise only hinted at in early Sonic Youth. The duo works along lines that are more akin to the Blue Humans -- with whom drummer Surgal began -- and also seems influenced by such underground acts as Fushitsusha and the Dead C. Moore's guitar is so distinct, however, that many parts here could be mistaken for a live Sonic Youth recording from that band's more heady and chaotic '80s period".