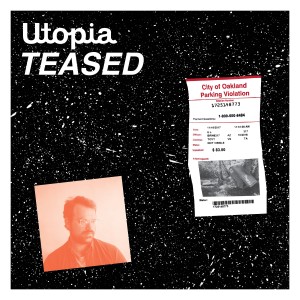 Stunned with grief in the months following the Ghost Ship fire, Oakland-based Stephen Steinbrink ate LSD daily, bought a synthesizer, and locked himself in his shipping container studio, refusing to sleep for days as he wrote and recorded what would become Utopia Teased, as a means of working through his overwhelming feelings of cynicism and loss.

Recorded in between stints touring as a member of Dear Nora, and then as a touring member of Girlpool, Utopia Teased is Stephen Steinbrink's followup to his critically acclaimed 2016 album Anagrams. Unlike the pristine production of Anagrams, on Utopia Teased Steinbrink embraces the rough edges, as he shifts his focus from the craft of production to the art of processing and capturing his experiences with honesty. He explains, “I was driving the preamps a little too hard, mixing down to tape, bouncing back to the computer, and repeating the process over and over again. I wanted it to reflect how fried my brain felt at the time, totally pulverized. The songs just poured out of me, it hardly felt like work to make them up. It was like turing on a spigot. I don’t write often, maybe once or twice a year, but when I do, a lot comes out..”

“Empty Vessel” and “Maximum Sunlight” both sung from perspective of residents of Tonopah, Nevada, were written to accompany a book about the town, by Steinbrink's friend Meagan Day. The sparse imagery on “Empty Vessel,” ostensibly about a semi-transient lock-picking truck driver, feels at least semi-autobiographical as Steinbrink sings “You're 31, you don't believe in anything…If you don't stop moving you'll never get hurt.” His evocative lyrics continue to intrigue on “Maximum Sunlight” as he sings “Sleeping through the night in the drained pool / I said I love you to a fool” from the perspective of a 30-year-old alcoholic ATV enthusiast.

Much of his outlook on life is captured on the elegiac waltz “Zappa Dream,” (originally written and recorded by his friend Rosie Steffy) on which he sings, “Dreams are so fucked up / Even the really good ones…Would it be such a bad thing / To be finished with living?...Everyone preserves a myth / Guards it like a bone / You see it in your lover's eyes / But never in your own…There is a magic on this earth / In cats and clouds and cars / For everything that you call "real" / Was once the dust of stars / Yeah you have been a river rock / And a drop of rain / And with any bit of luck / You'll be those things again / Are you in love with your life or a dream / Or just overwhelmed/ Wondering what this could possibly mean?” At the close of the, too-little-too-late acoustic narrative “Mom”, guest vocalist Melina Duterte of Jay Som joins him in conjuring a memory of listening to extraterrestrial radio, drifting asleep in a suburban Phoenix Wal-Mart parking lot. The album’s heartbreaking closer “I’m Never Changing Who You Are” continues Steinbrink’s recollection of his adolescence, asking an unnamed family member “Will you try to love more than you did?” while soberly accepting his reality.

In an interview with North of the Internet, Steinbrink recalled a video he came across on his phone, which was taken the day after the fire, “It sent me spiraling and thinking, it’s almost been a year. Nothing really felt actual those weeks, and I could only only react to the future at a remove because the horror of everything was inescapably tying me to the present. The idea of doing laundry or driving across the bridge to San Francisco to work was too abstract, so I just didn’t do it. I hardly did anything. Two days after the fire I woke up, walked to P.’s porch and sat there for hours alone and cried without a jacket on until the sun started going down. Geese were flying across power lines at dusk and I took a video of them on my phone. I imagined one of the birds was my friend.” In the same interview, he goes on to share some insight provided by a friend he reached out to when trying to finalize the album: “Finishing the thing puts a limit around something that comes from an infinite well; this is uncomfortable.” True.