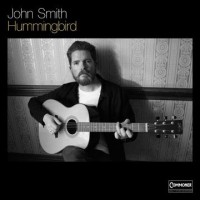 John Smith is an acclaimed singer, songwriter and guitarist from Devon, England. He has played to audiences all over the world in living rooms, festival tents and sold-out concert halls. He is a genuine folksinger, an inquisitive truth-seeker, devoted song interpreter, and enchanting writer. A contributor and collaborator, John quickly and effortlessly earns the esteem of his comrades and heroes. He has opened for folk greats including John Martyn, Davy Graham and John Renbourn, who called John Smith “the future of folk music.” On the contemporary side, he has also opened for Iron and Wine, Tinariwen, and Ben Howard. He has guested with artists such as Jackson Browne, Jerry Douglas, Glen Hansard and Rodney Crowell. He has played guitar for artists such as David Gray, Lisa Hannigan, Joe Henry and Joan Baez. John described his reason for making Hummingbird "

Ever since my teenage epiphany at the altar of Folk Music, hearing Nick Drake, Bert Jansch and John Renbourn for the first time, I have been a devotee. The six strings of my guitar have granted me access to a sacred space between things, the unconscious interweaving sensations that allow us that gentle buzz on hearing a good folk song. It was with this in mind that I returned to Sam Lakeman’s Somerset studio in March of 2018, two years since recording my previous album ‘Headlong’ in that same place, to commit six of my favourite folk songs to tape, alongside one cover version and three original songs. The tracks quickly took on their own shape in Sam’s able hands. I invited several good friends to join me in this process: Cara Dillon, John McCusker and Ben Nicholls. "