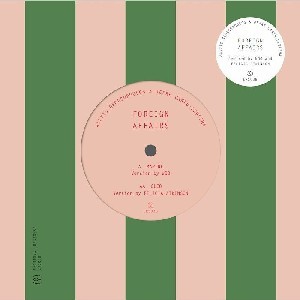 Emotional Response close the year on a high with "Foreign Affairs" - a limited edition special remix 7-inch single featuring reworks from Alexis Georgopoulos & Jefre Cantu-Ledesma's "Fragments of A Season" album by Woo and Felicia Atkinson.
Last year's ""Fragments of A Season"" represented a unique chapter in both artist's canon. Georgopoulos, who released the Arp album "Zebra" in June this year and Cantu-Ledesma, who released "On The Echoing Green" in October 2017 - both on Mexican Summer and to critical acclaim - wanted to stretch out and create a discrete work. A peripheral listen to "Fragments" revealed a resonant album of delicate, ambient vignettes, suggesting a Balearic take on Vini Reilly, Young Marble Giants and other poetically-minded, minimalistic post-punk era bands.
The Brothers Ives aka Woo were a major influence on the album's makers and so AG and JCL are thrilled they've submitted a beautiful reworking of the album's "Marine". Whereas the original sounded like Marine Girls and The Gist getting together for a nice beach day jam, Woo's rework transforms it into pulsating track of glistening proportions. Percolating synths, some guitar and clarinet - the true classic, idiosyncratic Woo-ification - creates a woozy, romantic, impossible to categorize slice of Balearic meets dub atmospherics.

If "Marine" is all midday sun, intoxicating and potently optimistic, Atkinson's remake represents the literal and figurative flip, bringing out the overcast dreaminess to "Cleo". Sounding like an outtake from a Rohmer film, or perhaps Cocteau Twins and Broadcast having a picnic in Biarritz, the version veers between abstraction, celluloid ambiguity and suggested narrative. Atkinson's reworking adds poetry of the tune (quite literally!) with her soft vocal under-gliding to perfection. Representing a temporary idyll, a meeting point where cobblestone streets lead to the sea. At nightfall, a discotheque heard in the distance. The morning mist burns off. Only such memories remain.