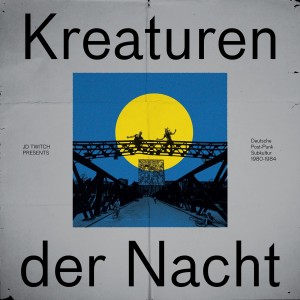 THE PICCADILLY RECORDS COMPILATION OF THE YEAR 2018.

1979 to 1984 was an era of particular artistic upheaval in Germany as strong subculture scenes formed in many German cities. Emphasis was placed on expression rather than technical perfection, artistic impact rather than skill. DIY self-organisation prevailed with the establishment of small record labels and independently produced records and cassettes. Bands experimented across genres and consciously abandoned the English-speaking mainstream with German band names and lyrics. “Although we had a small underground scene, it was very vibrant,” explains Gudrun Gut of Malaria! “Bands like Die Haut, my first band Mania D., Malaria!... we organised gigs ourselves or friends would open a gallery and have bands playing. We hung around together in a handful of clubs like Risiko or Dschungel and went to gigs at SO36. West Germany had other regional scenes too: Düsseldorf and Köln around Der Plan and the Ata Tak label and there was the Hamburg side with Abwärts. Germany didn’t have a real music industry like the US or England back then."

This new collection is a personal selection from JD Twitch, built over years of playing the tracks in club sets. “It is not designed to tell a definitive story of what was going on in Germany in this era,” he explains. “Rather, it is simply an arbitrary collection of records I adore from a specific era with a specific attitude that hopefully together sum up some of the musical undercurrents in Germany at that time.”

The package features a host of rare and unseen photos from the period along with extensive interviews with artists including Beate Bartel (Mania D.), Christoph Dreher (Die Haut), Michael Hirsch (P1/E) and Thomas Voburka (Weltklang). All tracks are remastered by The Carvery with artwork by Optimo’s in-house design man Andrew Beltran.