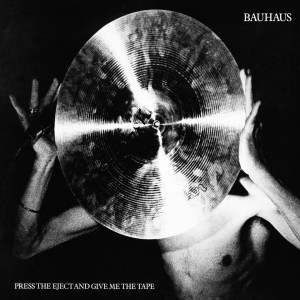 Bauhaus' landmark debut album, In the Flat Field, came out towards the end of 4AD's first eventful year. Following the plan at the time, the band then "moved upstairs" to Beggars Banquet, for whom they cut three further albums before dissolving in 1983. They charted with their cover of David Bowie’s “Ziggy Stardust”, they’ve been and namechecked by everyone from Nine Inch Nails, Sepultura, Janes Addiction, MGMT, Interpol, Bjork, Nirvana and more. They remain a huge cult concern, periodically reforming to wow their legions of dedicated followers.

Released in 1982, this is a live album, compiled from shows across the UK from 1981–82. Press the Eject… features a striking version of John Cale’s “Rosegarden Funeral Of Sores,” a particularly spooky run-through of “Hollow Hills” that out-creeps the studio version on Mask, and the punk rock fuzz-out of “Dark Entries”. Of course, “Bela…” appears here as well, in a luxurious nine-and-a-half-minute version. Washed in feedback and ever-so subtly accelerating and decelerating, this song is the true center of “Goth” mythology. This was mastered from HD audio files transferred from the original tapes.