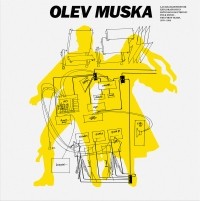 "Laulik-elektroonik" LP by an ex-pat Estonian musician Olev Muska is the new release of Estonian archival label Frotee Records. The compilation subtitled as "Explorations in Estonian Electronic Folk Music - The First Years, 1979-1983" brings together all Muska's Estonian-themed songs recorded prior to his debut album from 1985, "Old Estonian Waltzes". It includes previously unreleased material and tracks from limited edition tapes and 7" single. For its 10th release, Frotee has expanded its scope and is now also offering insights into quality music by Estonians all over the world.

Olev Muska was born to a family of expatriate Estonians in Australia. From 1979 onwards he recorded unique versions of Estonian folk songs on various electronic music instruments at his home studio. As Muska was into contemporary experimental music and also bored with the conservative take on Estonian culture prevalent in the activities of the Australian ex-pat community, he decided to combine these two influences to create his unique brand of electronic Estonian folk music. As Muska had access to more advanced musical equipment, he achieved a level of quality in his arrangements that would not have been possible in Soviet Estonia. He managed to create surprisingly amazing Estonian minimal wave with his group Elektrio but wasn't ashamed to make medley of Estonian themes with cheesy-sounding small Casio synthesizer either. His early versions of some folk songs, like "Kaera-Jaan" or "Saaremaa", are less crazy than on his debut LP and as such a welcome addition to Frotee's collection of Balearic sounds.

Although Muska was not a stranger to the contemporary Australian underground music scene, he continued to record with a couple of close friends and performed only at local Estonian events. Thus Olev Muska has been a well kept secret amongst Estonian music fans, one that remained entirely unknown to Australian record collectors until Chris Bonato from Left Ear Records introduced "Old Estonian Waltzes" LP to a wider audience. Left Ear Records has now licensed "Karjapoisi lugu" off the 1985 LP for their Australian underground music compilation "Antipodean Anomalies".