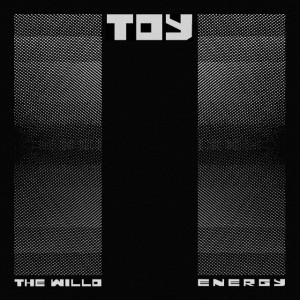 Since 2010, Toy have earned a reputation as a band of integrity, virtuosity and taste, with Tom, Maxim, Dominic, Charlie and (joining in 2015) Max creating a sound that is embedded in the underground tradition, yet distinctly their own. Now here comes a two-track twelve-inch on Tough Love, a foretaste of a forthcoming album in January 2019, which marks a new dawn for this most singular of bands.

‘The Willo’ is a dreamlike, seven-minute glide, redolent of a forest at sunset and just as pretty, but not without hints of malevolence. Maxim's fingerpicking acoustic melds with electric twang from Dominic, and a whirling organ from Max Oscarnold gives this elegant creation an extra layer of disorientation and depth. “People appear to have seen Will-o’-the-wisp, a mysterious green-blue light, over the centuries. It generally means something ominous is about to happen", says Tom.

Then there is ‘Energy’, which lives up to its name with thunderously metronomic drums from Charlie Salvidge and a ferocious guitar from Dominic O’Dair. The lyrics, culled from a story written by Max about a nighttime ritual, are obscured by the barrage-like forward momentum of the music.

The twelve-inch, recorded and mixed by the band between Oscarnold’s Stoke Newington flat and a south London studio, is the first release for Toy on their new label Tough Love, representing the latest stage in the evolution of the band. Since their inception, they have released the acclaimed albums Toy (2012), Join The Dots (2013) and Clear Shot (2016), and toured everywhere from Serbia to China, while holding onto that youthful, magical moment of discovering strange new worlds of innocence and experience.

Mine says: Welcome to the weird and wonderful world of TOY. The band return with "The Willo", a dreamy, innocent sounding song that quickly develops into the soundtrack to a ride through a magical forest, and "Energy", which with its pounding drums, driving bass and post punk-y, occasionally chaotic guitars could hardly sound more different. Two interesting songs that leave us excited for the new album!