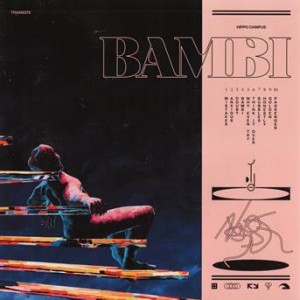 When Hippo Campus formed in 2013, their intentions were pure and simple."We were in high school and the main idea was, 'Let's start a band and make our friends dance,'" Zach Sutton from the band recalls. "There was no real context to what we were doing - it was just total creative joy."

But over the past five years, that context has shifted dramatically. The world around them warped into something bleak and unsteady, and reckoning with mental health issues became more and more crucial. On their sophomore album Bambi, the St. Paul, Minnesota-bred band navigate that upheaval with deliberate self-reflection. The result is a selection of songs that drift into much darker terrain, but unfold with a frenetic yet fragile beauty that makes even the most painful moments feel glorious.

Not only driven by exacting introspection, Bambi was also shaped by cultural shifts, including the #MeToo Movement. "That really made us take a look at how toxic masculinity has influenced the way we see ourselves and the world overall," says Jake Luppen. "In the past we might have been apprehensive about being super-vulnerable, but now we're more aware of how important it is to come forward about dealing with depression or anxiety. Because if more men are able to do that, they might be less likely to express those feelings as anger or violence."

Throughout Bambi, Hippo Campus match their relentless self-examination with a joyfully adventurous sonic approach, ultimately transforming the emotional experience of the problems they're exploring. One of the band's greatest hopes for Bambi is that the album might help others in dealing with their own pain. "I've always considered the responsibility of art to be representing your specific experience," says Sutton. "We're saying, 'This is what I'm doing now, this what I'm living like.' It's about sharing what you're going through, so maybe someone else will feel less lonely."

And as Nathan Stocker points out, Bambi may find a particular connection with those feeling shaken up by the chaos of current times. "The only thing I'm sure about with this album is how unsure it is," he says. "I want people to feel as confused as we are about everything, because confusion can be an interesting thing. When you don't totally understand what's going on, you never stop thinking and questioning and trying to figure things out for yourself. I think a lot of good can come from that."