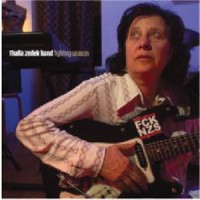 Thalia Zedek’s ‘Fighting Season’ is direct and raw, at times scorching and others fragile. The album features performances by guitarists and friends J. Mascis (Dinosaur Jr.) and Chris Brokaw (Come).

Thalia Zedek has been a been a seminal figure in the independent music scene for over 30 years as a member of Come, Live Skull and Uzi and, most recently, her trio E. ‘Fighting Season’ showcases her best songwriting and performances to date, featuring musicians she has worked with for many years, including longtime collaborator and violist Dave Curry, pianist Mel Lederman, bassist Winston Braman and drummer Jonathan Ulman.

‘Fighting Season’, a term originally coined for the period of time in Afghanistan when winter comes to an end and fighting resumes, is reinterpreted by Zedek with a the focus on a rebirth of resistance brought on by the deteriorating US political landscape. Zedek deftly combines the force of her playing with the urgency of her unmistakable voice to spin tales of discord and struggle from the personal to the political. The potency of her message reflects her exceptional songwriting and playing.