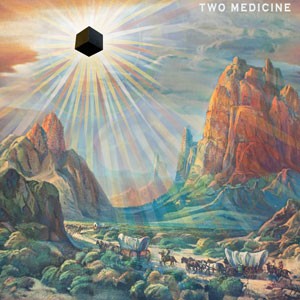 “I’d always wanted Midlake to experiment more with the arrangements, or to get more into psychedelic textures,” says Paul Alexander, the bassist from Denton’s prog-folk voyagers. Those ambitions are fulfilled on Astropsychosis, Alexander’s debut album as Two Medicine, released via Bella Union in November. Richly ambitious in its sonic colour and conceptual reach, Astropsychosis is an album of luminous space and mindful grace, its depths and details coaxed into orbit with the lightness of an artist in his element.

Alexander began facing his future in January 2016, after a year-long break from music following Midlake’s tour for 2013’s Antiphon. “I wanted to find out if I could write songs and if I could sing them – basically, whether or not I could make an album on my own,” he asks. Over 15 months of writing, arranging and recording (in Midlake’s old studio in Denton), he got his answer. From the early reference points of Pet Sounds, dream-pop and pre–Dark Side of the Moon-era Pink Floyd, Astropsychosis blossomed into a very modern exploration of sound and psychedelia, bright on top and burning with purpose below.