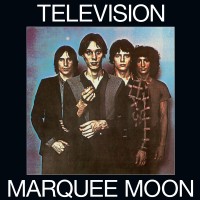 Television are pleased to announce ‘Marquee Moon (Deluxe Audio)’. The legendary band Television were part of the ’70s New York City underground rock scene, where they were among the first bands to play the punk rock and new wave venue CBGB. Richard Hell left the band in 1975 before the recording of Marquee Moon to be replaced by Fred Smith.

Marquee Moon was released to widespread critical acclaim in February 1977 and has since been viewed as one of the greatest albums of all time and continues to open eyes to the ways the Verlaine and Lloyd utilised electric guitar creatively within punk rock.

Marquee Moon 2LP deluxe vinyl will be released on 5th October on blue vinyl with the original album plus an additional LP of bonus tracks that featured on the 2003 remastered CD.