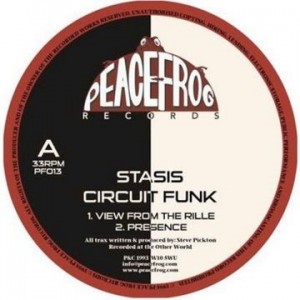 Growing up as a teenager in East London, break-dancing and writing graffiti with B12’s Mike Golding, Steve Pickton’s AKA Stais musical education moved along a familiar path, from hip-hop to Electro and onto Techno. Schooling himself in music theory and purchasing a sampler Pickton set about making his own music. Releasing on a whose who of seminal UK electronic labels including A.R.T., Likemind, Otherworld and B12 under various pseudonyms Pickton’s UK take on lush Detroit melodies fused techno, funk, hip-hop, dub, blues and jazz into a dense concoction all of his own making. Re-issued for the first time since its initial release in 1993 Circuit Funk Pickton’s debut release on Peacefrog is packed full of lush Detroit melodics and future funk that still sounds unique and fresh today.