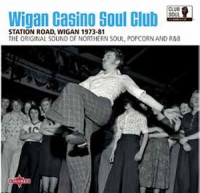 While other clubs may be able to argue they were the birthplace of Northern Soul in the UK, few can claim to have the same popularity or influence as the mighty Wigan Casino. The venue became a Mecca for fans of rare, imported soul records, with a passionate, dedicated fanbase. No-one could have predicted the club’s enormity and impact on Northern Soul. Perhaps it was a combination of circumstances: the untimely demise of the Golden Torch in Stoke-On-Trent, the escape from the workplace that the “scene” offered, a sense of belonging, and something your parents couldn’t begin to understand!
This new LP album, presented on 180g heavyweight audiophile vinyl with sleeve notes, collects some of the classic tracks that were played at the famous club from 1973-81 including exclusive songs not on the 2013 CD edition (CHARLY661X).
It features a host of legendary artists including The Ringleaders, The Jerms, Ohio Players, Blanch Carter, The Inspirations, The Young Savages, Little Richie, Maurice Williams, Ron Holden, The Combinations, The C.O.D.’s and more.

Clarence Murray “Let’s Get On With It”
The Appreciations “I Can’t Hide It”
The Ringleaders “Baby, What Has Happened To Our Love”
The Jerms “I’m A Teardrop”
The Ohio Players “Love Slipped Thru My Fingers”
Blanch Carter “Halos Are For Angels”
Little Johnny Blair “Momma’s Gone”
Skull Snaps “I’m Your Pimp”
The Inspiration “Your Wish Is My Command”
The Young Savages “(Shake Me) Can I Be Dreamin’ ?”
Little Richie “Just Another Heartache”
Maurice Williams & The Zodiacs “Being Without You”
Ron Holden “I’ll Forgive And Forget”
Johnny Dynamite “The Night The Angels Cried”
The Combinations “What’cha Gomnna Do ?”
The C.O.D’s “She’s Fire”