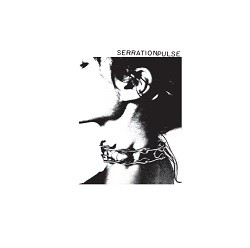 Serration Pulse is Daniel Tomczak (Terrible Twos) and Kayla Anderson. Both are Metro Detroit natives who currently live in the city, having recently moved back after some years spent in Nashville. Formed in 2012, their music took shape as they participated in that city’s electronic/noise scene.

The duo’s influences construct an artistic harmony that represents them well. Tomczak cites sounds of machines, things in radios, and vacuum cleaners as a source of inspiration from a young age. Anderson writes the lyrics, but considers herself more visual than verbal. She is creatively driven by that which she sees around her or out in the world. Together, the two strike a serenely somber balance that is systematically executed in their music.
The three songs on their self-titled EP (mastered by Eric Van Wonterghem of Absolute Body Control) are glacial, menacing electro-dirges — the spirit of punk filtered through the angst of electronics. “The Beach” is cascading waves of electro-terror, an icy shore traversed by Anderson’s haunting voice. “Faces Down” is the charred remains of humanity, dust in the wires of shrieking electronics, snakes hissing, crystals popping. “Stockholm” is hypnotic cynicism, devotion to despair, a paean to the gloom.

The music of Serration Pulse avails itself of the full range of the synths’ possibilities, sounding at once both full and grotesque, ethereal and coarse. Yet no life is lost. It is all contained in their instruments, transformed into logarithmic sorrow, and released in grimly spellbinding reverberations upon unsuspecting audiences.