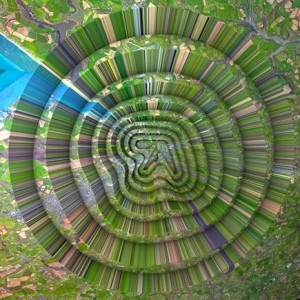 What's left to be said about Richard James? One of the most spectacular and critically lauded producers in the world, a divisive musician and Delphic artist, nearing his thirtieth year in 'the biz' and his sound continues to innovate, experiment and enthrall. The David Bowie of electronic music - for some there is simply no parallel and every last artifact is to be feverishly collected and treasured.

A new EP that somehow extended and builds on his idiosyncratic and highly flamboyant style, the first duo of tracks, "T69 Collapse" and "1st 44" are at once playful and majestic. The first exploring the typically smiley-Cornish-acid-tekno genre with aplomb while the second implores deep subs and his galloping drum sequences to create a wobbly and cerebral track that plunges effortlessly into modern 'half-time' business, merging the best bits of techno, glitch, footwork and IDM in a truly Aphex flavoured broth.

Flip the disc and "MT1 T29r2" explores the darker and deranged sides of his persona - utilizing the Kork's MS-20 filter to maximum devastation while more peppery, skitting drum flurries explode out of the recesses of the mix. Finally, "Abundance10edit[2 R8's, FZ20m & A 909]" (phew!) sees James showing off with his world beating drum programming. Can anyone sequence beats better than AFX? No way hosay - as this final tracks sends us tumbling, flailing and spiraling into the speaker stacks like no-one else can. Still the king of electronic music? Youbetcha! Another essential addition from this acid overlord.

Matt says: Every time there's a new Aphex release I'm convinced I've grown out of him and won't like it. Time and time again I've proved wrong as this producer par excellence continues to be ten steps ahead of the pack.