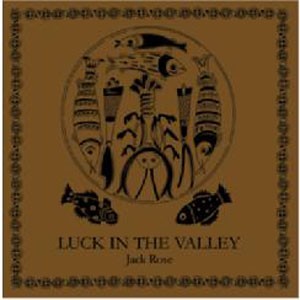 ‘Luck In The Valley’ is the 10th and final album by Jack Rose and is the yardstick by which many contemporary acoustic guitar albums are measured. This 2018 re-issue makes this contemporary classic available again for the first time since 2010.

Jack Rose first rose to prominence with the drone/noise/folk unit Pelt. Pelt can be counted among the early influential new music underground bands such as UN, No Neck Blues Band, Charalambides, Tower Recordings and Six Organs Of Admittance. Along with the influences of John Fahey and Robbie Basho, Rose also incorporated North Indian classical, early American blues, bluegrass and minimalism into his singular style.

‘Luck In The Valley’ came right as Rose’s influence was just beginning to take flight but was sadly his last album before his unexpected death in December of 2009. Still, his music and influence, much like his person, bold, hearty and rooted in traditional American music continues to be a source of reference for guitarists and musicians carrying traditional American music into modern times.

“Jack Rose is acoustic music... Without ever singing a word. Jack Rose could communicate in a way few musicians can.” - PopMatters

Blues For Percy Danforth
Lick Mountain Ramble
Woodpiles On The Side Of The Road
When Tailgate Drops, The Bullshit Stops
Moon In The Gutter
Luck In The Valley
Saint Louis Blues
Tree In The Valley
Everybody Ought To Pray Sometime
West Coast Blues