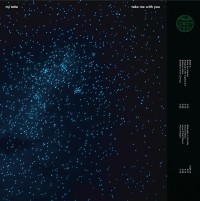 Compilation of the works by MJ Lallo, weird harmonizing mantras layered with drummachine rhythms.. Very psychedelic compositions where she uses her voice to create all kinds of sound(scapes)

Take Me With You is a revelatory voyage through the captivating universe of voice artist and poet MJ Lallo. The works on this 2LP compilation were all recorded in her home studio between 1982 and 1997, primarily using drum computer, synth and her own voice processed through a Yamaha SPX 90 digital effects unit. They range from wordless harmonizer mantras and primitive drum computer meditations, to psychedelic latin dance-floor anthems and synth-drenched end-of-the-nighters. Lallo has created her own inimitable galaxy of sound where the human voice, liberated from the constraints of language and abstracted using digital technology, is able to explore the outer realms of human expression, like Joan La Barbara with an Eventide and a new-age sensibility. Although Lallo’s flight path is distinctly her own, her journey converges with other travellers as diverse as Jon Hassell, Laraaji, Stereolab, William Aura, Laurie Anderson, Meredith Monk, Gertrude Stein and even Terry Gilliam (whose film Brazil was a big influence on Lallo). Like something beamed in from another planet, Lallo’s work is both fascinatingly strange and strangely familiar, and will leave a lasting impression for lightyears to come. Double gatefold LP, remastered DDM pressing.

LUHSpiritual Songs For Lovers To Sing

We Were StrangersBeneath A Broken Sky