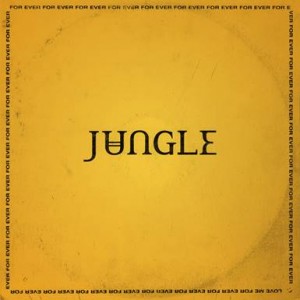 New album from Jungle which follows on from 2014's award winning and acclaimed debut album. Jungle highlighted the aspirational sound of young London at a turbulent time in the city's history. Shunning the dark, claustrophobic sound of grime, or the frenetic, inhuman electronics of (ironically) jungle or its many mutations; for a much sunnier, dare-I-say friendlier sound, indebted to soul and pop music.

Masterminded by Josh 'J' Lloyd-Watson and Tom 'T' McFarland, a production and multi-instrumentalist duo who never expected to leave their bedroom studios, far less become the core of a talent-filled seven-strong collective that morphed into a killer live outfit. "Jungle" garnered rave reviews, untold amounts of hype and a Mercury Music Prize nomination; Noel Gallagher declared the album 'fucking amazing' and it achieved half a million sales.

"For Ever" follows up with a lot of prove. Less dreamy and more direct, it's 'inspired by real life experiences of places they've always dreamed of'. Swapping Shepherds Bush for the Hollywood Hills, J and T set up camp in Los Angeles to write and record the album. Over time however, their romanticization of The Californian Dream clashed with the reality of actually living it, the feeling of being adrift on the West Coast compounded by the collapse of long-term relationships. Returning home to London, they teamed up with highly regarded young producer Inflo where they sought to create a 'post-apocalyptic radio station playing break up songs', whittling down loads of ideas this concept spawned into the core 13 tracks you have before you. "For Ever" is for real, deeper and higher, more intimate and more expansive, feel-good and, just occasionally, feel-bad. It is, then, a proper second album and solidify Jungle as a true UK talent to cherish.