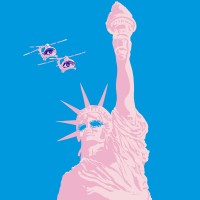 PNKSLM Recordings are beyond excited to announce the second full length from Stockholm's Les Big Byrd. Consisting of Jocke Åhlund, Nino Keller, Frans Johansson & Martin "Konie" Ehrencrona, Les Big Byrd have been consistently one of the most exciting bands at the forefront of the Swedish music scene. Following on from 2014's "The Worshipped Cats" LP (A Recordings).

Long awaited second album from this stargazing psychedelic pop collective, with a slick production that ensures the trip is an aural joy.

Fans of follakzoid / hookworms / will find much to lose themselves in on this album!!