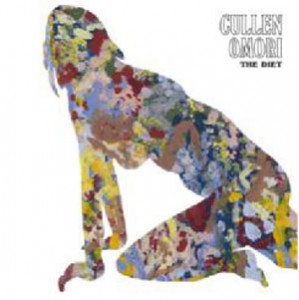 Cullen Omori’s path to his second album ‘The Diet’ wasn’t an easy one. After the release of his first album, ‘New Misery’, he had to deal with busted vans, crashed cars, mangled relationships and other trials that can leave one feeling like the world is playing a cosmic joke. From the guitar that drops out of the sky on the opening track ‘Four Years’ all the way through the fade-out of kaleidoscopic closer ‘A Real You’, ‘The Diet’ is a powerful modern indie rock album that is buoyed by warped, analogue pedals / transistors and tailor-made guitar tones. Omori’s winsome vocals crisscross 70’s art rock and classic songwriting all within the span of 40 minutes.

Omori crafted ‘The Diet’ as a series of what can loosely be defined as love songs that metaphorically channel the frustrations and ruptures of his turbulent 2016-2017 into unforgettable compositions with abstract yet sharply rendered lyrics. Omori’s version of the love song medium goes far beyond the la-la-love-you template: “Only a few deal with loving or falling out of love with an actual, physical person,” says Omori. “Then there are, like, love songs to my antidepressants or whatever I thought my life would be like at 27.”

After relocating from Chicago to Los Angeles in 2016, Omori re-examined his whole artistic process. “Whereas on ‘New Misery’ I was locked in a room with a producer for a month tinkering away, this time around I wanted the sessions to be a revolving door of musicians: different people, different aesthetics. I pushed against my inner nature by actively pursuing collaborators.”

‘The Diet’ was recorded at Velveteen Laboratory with Taylor Locke, whose talents wound up being well-suited to the intricacies of the songs that would become ‘The Diet’. “He can sing, he is a multi-instrumentalist. On top of that, he is also a producer. Working with him really lent itself to my process of songwriting,” says Omori.

‘The Diet’ represents a new chapter for the former Smith Westerns member, one in which he stretches out his songwriting chops and uses his life experience to craft loose-limbed, hook-filled songs that combine pop appeal with finely sutured lyrics. “I spent my early 20’s saddled with the ill-conceived, romantic notion that the best songs are written through suffering. The process of trying out a completely different persona and approach in ‘New Misery’, and then facing my negative experiences and the shortcomings of that persona, clarified where I wanted my music to go. While making ‘The Diet’, my songs were constantly presenting themselves to me, and when I got a chance to listen back and read my song journals I saw what a truly beneficial and cathartic event had taken place.” ‘The Diet’s collection of 12 songs has Omori well on his way.