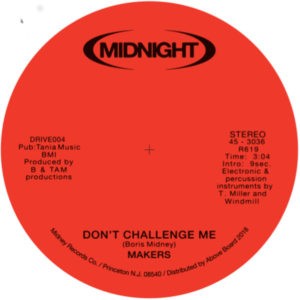 Midnight Drive extend their winning streak with this most beautiful and unique of records - Makers 'Don't Challenge Me' - A truly idiosyncratic early 70's electronic oddity that has long been a coveted and highly prized piece of music by obscure music lovers for many years.

Makers was the moniker for another studio project by legendary euro-disco pioneer Boris Midney. Midney, a Russian ex-pat, explored his own sonic world and in the process crafted some of the biggest records during the most fertile times in the disco period, he created numerous projects including Beautiful Bend, USA-European Connection, Caress and many more.

A classically trained musician and jazz artist, his trail-blazing studio work meant he was one of the first producers to embrace the capabilities of multi-track mixing in a most creative way. Listening to this 45, a limited release on his own 'Midney' micro label, you can certainly hear genius at work, it's mind boggling that this record was crafted when it was (1972) as it sounds totally ahead of it's time and sounds exciting and original to this day.
This is the very first time this record has ever been reissued (it was included on the most incredible 'Personal Space' compilation from a few years ago) and people will be very surprised to hear the b-side for the very first time - 'You're Shy' - A sweet soul number that almost recalls The Staple Singers and could easily have been released on Stax or any familiar labels of that ilk that somehow manages to retain the strange and overall DIY aesthetic of the 'Makers' sound.

Patrick says: If, like me, you became obsessed with the kaleidoscopic world of those Trapdoor mixes a few years back, you'll lose your shit for this 7" reissue. The work of Boris Midney, "Don't Challenge Me" is a superbly spacey psych-funk groover, packed with seductive soul and the nebulous haze of the milky way.

A Don't Challenge Me
B You're Shy