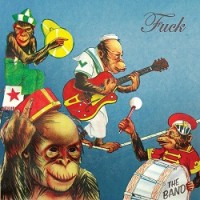 Presenting fuck’s first new record in over ten years, the band, on Vampire Blues! In the mid-’90s to the early aughts, fuck was releasing a new record every other year and touring constantly while jumping from label to label. Then, with nary a warning, they up and disappeared. No note, no nothing.

Skip forward a generation and it’s revealed that they’ve been spending all these years meticulously sculpting the most impressive album of their career. Recorded in fits and starts and all over the map, from basic tracks in San Francisco to overdubs in Italy and mixing in Memphis, the band comes through with a surprisingly cohesive sound; though, like their six previous studio albums, the genrebending and boundary-pushing song-writing continues. Any lesser band would have destroyed all sense of spontaneity going this route; not fuck. The casual off-thecuff attitude remains, but now with added depth and clarity. The highs got higher, the hard hits harder. And it only took ten years!