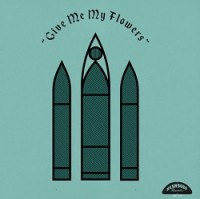 Founded in 1951 by independent record store owner and radio show promoter Ernie Young, Nashville, TN’s Nashboro Records recorded some of the most potent and forceful gospel music of the time period. Although initially begun in response to overwhelming demand for gospel locally, Nashboro quickly became nationally applauded for its curatorial prowess (under the guidance of Rev. Dr. Morgan Babb of the Radio Four) and signature production style.

The lightly-reverbed, clear sound of a Nashboro record is unmistakable. Give Me My Flowers is a compilation of some of the finest cuts released by Nashboro Records, many of which have not been previously reissued. It kicks off with a total banger, The Hightower Brothers’ “Until He Comes,” which would have made an amazing cover song for Spacemen 3.

Iola and Sullivan Pugh, also known as The Consolers, top off the A-side of the compilation with the intensely potent namesake track, “Give Me My Flowers”. A final highlight is “Almighty God” from Sister Pope and the Pearly Gates; dare you to get it out of your head after you hear the chorus even once. Not only are the featured artists endlessly skilled at their craft, their songs are absolutely explosive. This is the opposite of indifference or irony; there is a mission here, steeped in a full-heartedness that can only be derived from selfless devotion. Additionally, the songs featured on Give Me My Flowers are representative of a far too overlooked and important chapter in Nashville’s music history.

These musicians, store employees and businesspeople played a critical role in building the infrastructure for independent music to flourish in their city. Naturally, it is a cornerstone in Third Man’s long-term mission to support and highlight the complete music histories of Tennessee and Michigan, from the most rightfully revered to the most critically under-represented. All of these tracks were assembled with producer and journalist Mike McGonigal (Detroit Gospel Reissue Project, Temperature’s Rising: An Oral History of Galaxie 500) and transferred directly from the 45 collection of Kevin Nutt (Case Quarter Records, Sinner’s Crossroads radio program).

A1. The Hightower Brothers - Until He Comes
A2. The Angelic Gospel Singers - Touch Me Lord Jesus
A3. Radio Four - Received My Blessings
A4. Little Johnny Jones And The Little Jones Singers -  Just One Step
A5. Bonita Cantrell - Why Not Today
A6. The Trumpeteers - Seven Angels
A7. The Dixie Nightingales - Would Not Be A Sinner
A8. The Consolers - Give Me My Flowers
B1. Edna Gallmon Cooke - Stop Gambler
B2. Swanee Quintet - Sit Down Servant
B3. The Skylarks - Jesus Keeps Me Alive
B4. Sister Pope And The Pearly Gates - Almighty God
B5. Southern Echoes Singers - When Jesus Says Come Home
B6. Supreme Angels - Rest From My Labor
B7. Holmes Sisters - Son Of Man
B8. Gospel Song Birds - When They Ring Them Golden Bells