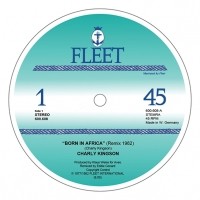 High Fashion land at Piccadilly with a pair of Afro-disco worldies here, plucked from the archives of Cameroon's groove master Charly Kingson. Though less known than Tony Allen or Fela Kuti, Charly shook the continent up in 1978 when he dropped the mighty "Born In Africa" LP, a funk-full, disco tinged bomb which packs way more power than your usual tropical tackle. "Born In Africa" itself is shuffling, swaying Afro-disco smasher for the dancefloor, and this original 1982 remix from legendary Dutch percussionist Eddie Conard squeezes every bit of body moving magic from the unstoppable groove. So far so good, but it's the squelching, stomping force of futuristic dancefloor smasher "Nimele Bolo" that's got the real heads spinning! Cut from a similar cloth to those classics from Connie Case and Coach House Rhythm Section, this combo of limber, lysergic synth squelch, disco 4/4 and the full funk force of wah guitar, hot horns and killer clav causes maximum destruction on a big rig. Chuck in the extra energy of a chanted / shouted vocal and you're well on your way to a no holds barred system smasher! Released in 1982 on Ariola/Fleet, but also pressed on the original Fleet label. The latter (remarkably with identical catalog-number) never saw daylight. All in all, this hard to find 12” (at Discogs copies on the Ariola/Fleet label go for around 250 euro) was recently re-discovered, and now you can finally enjoy it again.