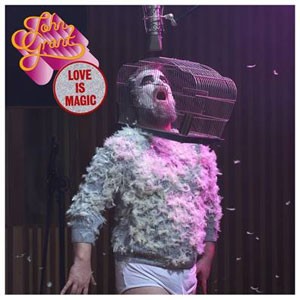 It's been a hell of a recent past for John Grant, who, aside from getting the unquestionable delight of getting to see our faces every time he comes to Manchester (and us, his), has produced a superb album with Stephen Mallinder of Cab Voltaire and Wrangler fame under their collaborative moniker, 'Creep Show', and a string of live dates in the diary. All of this while recording his oft-teased new LP, 'Love Is Magic'.

'Metamorphosis' kicks things off, bringing together stabbing saw-waves and Grant's unmistakeable vocal acrobatics, tumbling atop off-piste melodic turns and new-beat percussives, setting a brilliantly warped precident before what may well be Grant's finest work to date in the stunning titular piece, 'Love Is Magic'. Treading familiar minor-key ground, we get a solemn but hopeful progression played out by stabbing synth lines and huge gated snare hits, covering all the sonic space necessary while keeping the mess down to a minimum and allowing John's voice to really shine before launching into the mindblowingly beautiful chorus (the vocal harmonies, attributed to Paul Denton of Midlake have an ethereal and dynamic momentum that is unmistakeable) and staggered but determined forward-thrust.

I could keep running through the tracks, but some of our readership would doubtless give up or expire before i'd finished blathering on, so i'll keep it to a few key points. 'Smug Cunt' while clearly filled with the wry venom we've come to know and love from Grant is an unimaginably deep cascade of dytopian synth pulses and resonant bass,  launching into a spine-tinglingly effective culmination of gloom and euphoria. 'He's Got His Mothers Hips' brings the camp disco vibes spectacularly, with a truncated snappy analogue bassline swirling around beneath the syncopated vox before exploding into a major key serotonin release in the hand-waving chorus.

Move on a little and the spoken-word commentary of 'Diet Gum' takes an admittedly hilarious step into the leftfield, perfectly illustrating JG's clever tongue-in-cheek sense of humour 'Did you really think you could seduce me in a leisure suit?... well.... fair enough' and captivating presence before bringing it back to the sublime with the tear-inducing majesty of 'Is He Strange'. Stunning piano and vocal harmonies meet together into the perfect storm of majesty and misery. The closing duo of 'The Common Snipe' and 'Touch And Go' are once again perfectly matched, with the minimalistic backline and flickering sample and hold synth lines peaking lightly behind the former, and the anthemic, rolling stagger of the latter closing off a stunning and career-defining collection. It's a testament to Grant's sphere of influence and ability as a songwriter and producer that so many influences can be absorbed into his sound without sounding forced or disjointed. A brilliantly melodic, heart-warmingly anomalous wonder.

Barry says: Once again, John Grant pulls out a diverse range of influences (we've seen what records he buys!) into a cohesive and superb combination of off-piste vocal timbres, mind-melting synths and spine-tingling melodies. Punctuated with moments of introspective melancholy but quickly resolved into a warm bath of huge rock progressions and gritty synth swirls. Absolutely brilliant, and undoubtedly the best work of his career.