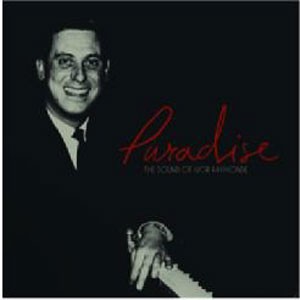 Classic singles like Billy Fury’s ‘Halfway To Paradise’, Dusty Springfield’s ‘I Only Want To Be With You’ and The Walker Brothers’ ‘Make It Easy On Yourself’ would not have been hits without Ivor Raymonde. As their arranger, and in the case of ‘I Only Want To Be With You’ songwriter too, he shaped the final recordings. He decided on the orchestration and backing vocals, chose the instruments and determined what was heard on the radio - and what record buyers bought.

‘Paradise: The Sound Of Ivor Raymonde’ is a long-overdue celebration of Ivor Raymonde, collecting his work as an arranger, musical director, producer, singer and songwriter. The story of a British musical great is told for the first time.

Billy Fury, Dusty Springfield and The Walker Brothers are heard. So is the only vocal performance for which Ivor Raymonde received a credit on a record label. He worked with the pre-fame David Bowie and Tom Jones. He spotted the potential of Los Bravos, steering them into the charts with ‘Black Is Black’. Near-misses and obscurities made with Brit-girls Cindy Cole and Helen Shapiro, the soulful Sonny Childe and confrontational protopsychedelic London band The Flies are as fantastic as the hits. With these and more, ‘Paradise: The Sound Of Ivor Raymonde’ distils the essence of the magic of Ivor Raymonde.

‘Paradise: The Sound Of Ivor Raymonde’ is released by Bella Union, the label run by Ivor’s son, former Cocteau Twins member Simon Raymonde. Compiled by Simon and Kieron Tyler, it is a very personal tribute to a sadly missed father. Born in 1926, Ivor Raymonde passed away in 1990.

The previously untold story is revealed through a moving reminiscence written by Simon and in-depth liner notes and a track-by-track commentary by Kieron. Ivor Raymonde played on the ocean liner The Queen Mary in 1949. In the Fifties, British television viewers saw him in legendary comedian Tony Hancock’s ‘Hancock’s Half Hour’ but music was always going to be most important - the hits with Billy Fury and Dusty Springfield in 1961 and 1963 meant he was in demand. The 26 selections balance the wellknown with collectable rarities and tracks drawn from - until now - barely heard-of singles. Each is a gem and each shows the magic of an Ivor Raymonde recording.

‘Paradise: The Sound Of Ivor Raymonde’ is issued on CD and 180g heavyweight double vinyl album with digital download code. The vinyl version is sequenced slightly differently for listening flow. Every track was originally issued as a single issued in mono for the pop market until 1968 / 1969. Keeping the integrity of the compilation in mind, all but four tracks appear in mono as they did originally. The masters used are those of the original singles.