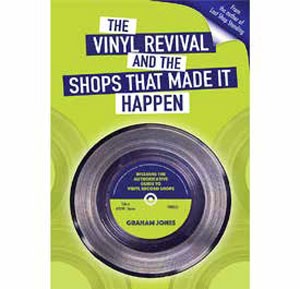 ‘The Vinyl Revival And The Shops That Made It Happen is the story of the vinyl revival through the eyes of those who made it happen, the independent record shops. It explains why more than a hundred more record shops have opened since 2009, and how others have gained the reward from their hard work. Budget turntables, manufactures, supermarkets, chain stores, clothes shops, pressing plants and even the government are among the many who have benefited from their efforts.

Graham Jones has spent 32 years travelling the UK selling to independent record shops and visited more record shops than any other human. This book guides you around the record shops of the UK who sell new vinyl. He has gathered some fascinating and funny anecdotes told him by our much-loved record shop staff so that when you visit you will feel like you already know the characters behind the counters. It is perfect for vinyl fans to keep with them on their travels around the country.

Intriguing anecdotes include:
** The shop manager who sold his vinyl collection to save his life.
** Record shop owner wins £148,000,000 and sets up his dream shop.
** The shop where John Lennon cried.
** How an international rock star was mistaken for a motor vehicle.
** Rock star offers to be best man after a proposal of marriage takes place in a record shop.
** The shop where a customer saves the day by giving world famous band a lift to the stadium in his Ford Focus.
** The record shop who attracted a huge crowd for a signing by world famous soul singer only for him to send one of his backing singers to fill in for him.
** The Buckinghamshire record shop who pretended they were in Yorkshire.
** The record shop blown up by a bomb.
** The shop owner who sold his house to buy more vinyl.