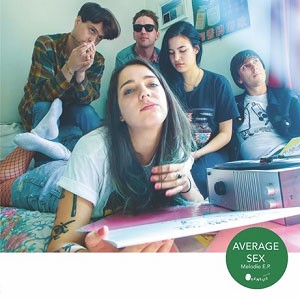 London band Average Sex have announced the release of their second EP ‘Melodie’, released on Tim Burgess’ O Genesis Recordings. The EP was produced by Tim Burgess and James Spencer and recorded in Cheshire and is the follow-up to the acclaimed debut EP ‘Ice Cream’ that was released in December.

With Average Sex it's love at first sight and love at first listen - just depends whether you see them live or hear one of their records first. If you like girls, boys, guitars, melodies and something to dance to then Laetitia, Sam, Louise, Finn and Jamie might well be your new BFFs. Finding love, falling out of love, slashing tyres, eating ice cream - all the major subjects are covered in classic three-minute pop gems that you will still be humming days later. Their songs are gorgeous and their gigs are hectic. And now they have a new EP with four reasons to love them more: ‘Ne M’Oublie Pas’, ‘U Suck’, ‘Melodie’ and ‘Sociopath’ are future classics.

Average Sex are like the band you've been matched with on a dating site, so be free and go meet them for a drink