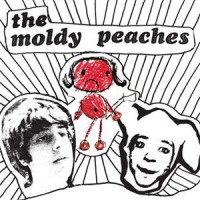 The Moldy Peaches were established in the mid-90s by Adam Green and Kimya Dawson, after meeting in upstate New York. The duo helped spawn the “anti-folk” music genre movement, bringing a more quirky, lo-fi punk element into the indie music scene. After releasing their own music for a few years, they collected their best material for a proper album, and in 2001 shared “The Moldy Peaches” via Rough Trade Records.

Kimya Dawson has also made children’s albums, and collaborated with many artists including Aesop Rock, They Might Be Giants, and The Mountain Goats. Adam Green has several albums on Rough Trade, as well as showing exhibitions of his visual art and making films.

We asked Adam Green what he thought about reissuing the album at this time....he said "It's been 17 years since this was last released and we are putting it out again just in time to capitalize on the popularity of Juno. JK LOL  we are slow at re-releasing stuff. We decided to ignore Barbara Walter's advice when she told us to strike when the iron was hot, and decided to wait until the iron had become safely tepid. Once a Moldy Peach, always a Moldy Peach. Bon appétit!"

“punk poets disguised as Nancy Sinatra and Dean Martin against a background of guitars and hiss...sweetly crazy and completely memorable.” -GUARDIAN