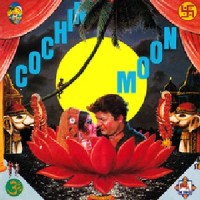 "Cochin Moon" (コチンの月 Kochin no Tsuki) is Haruomi Hosono's fifth solo album. Initially intended as a collaboration with illustrator Tadanori Yokoo, who traveled to India alongside Hosono (as part of a group) for inspiration; Yokoo ended up only drawing the cover, having been the worst victim of an outburst of severe diarrhea amongst the group during the trip, rendering this as a Hosono solo album. Cochin Moon was conceptually written as the soundtrack of a non-existent Bollywood film, a trait inspired by the artists' trip. The album includes performances by Tin Pan Alley keyboardist Hiroshi Satō and Yellow Magic Orchestra members Ryuichi Sakamoto & Hideki Matsutake. Despite being Hosono's first completely electronic solo album (at the time YMO's debut was still being recorded, making this Hosono's first electronic album to be released), the exotica feel of Hosono's previous solo work is still present. The first half of the album (named after an Indian hotel that the group was in for the trip, a picture of the hotel's front appears in the back of the album's packaging) consists of three thematically themed songs, the second half of the album (and Hosono's keyboard performance) is credited to "Shuka Nishihara" (西原朱夏), a pseudonym Hosono created as a play on Hakushū Kitahara's pseudonym.