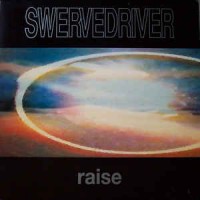 The Oxford based alternative rock band Swervedriver continued to develop themselves by implementing different music into their alternative rock and shoegaze sound. Their first album Raise can be categorized as an album with a heavy sound, but also some melodic parts. Their direct approach of the shoegaze sound can be heard by listening to a song like “Rave Down”. But they’re mainly focusing on the noisy and distortion guitar lines. While listening to the classic “Son of Mustang Ford” you feel the roaring engine run and are drifting back into the American landscape. It’s one out of the fascinating 9 tracks, with solid hooks and shiny guitar riffs. Twisted relationships get’s their punchline on the epic “Deep Seat”. The great debut album meant the start of a great career which haven’t been finished to this date.

Swervedriver’s heavy days have not yet been gone. Since their reformation in 2008 they’re touring all around the world and in 2018 they hit the stage again. There latest release “I Wasn’t Born to Lose You” dated from 2015 and meant their return in the shoegaze revival

Andy says: Incredible debut album from 1991 finally gets a reissue. This lot were so untypical of the Creation "sound", and all the better for it!

Sci-Flyer
Pile-Up
Son Of Mustang Ford
Deep Seat
Rave Down
Sunset
Feel So Real
Sandblasted
Lead Me Where You Dare...

SwervedriverI Wasn't Born To Lose You