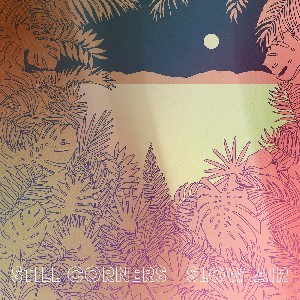 'Slow Air' is the fourth album by Still Corners, released on Wrecking Light. Evoking the atmospheric sounds Still Corners are known for, 'Slow Air' continues the band's journey with an album full of tension and brooding all the while wrapped in a reverb laden dream. Written in the hill country in Austin, Texas, Slow Air nods towards a classic sound with emphasis on the guitar, both acoustic and electric, combined with the alluring and ghostly voice of Tessa Murray. The songs are rounded out with live drums and minimal synthesisers with all the mistakes kept in for maximum human feel and emotion.

The album title is derived from the sultry heat in Texas which causes everything and everyone to slow down. While writing SLOW AIR, Still Corners found inspiration in the change of leaving England for the States and traveling around the massive expanse that is North America from the deserts of Texas and Arizona to the beaches of California and mountainous regions of the north east New York. Recorded in a new studio designed by Greg Hughes in Austin, TX, Still Corners focused on a recording process that was as fluid and minimal as possible. Using a variety of microphones both old and new the band recorded and mixed this new set of songs in three months. Keeping everything fresh and not over-thinking moved the album to the finish line faster than any album Still Corners had written and recorded before. Joe Laporta put the finishing touches on at Sterling Sound in NYC.