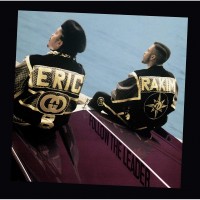 The major label massive come through with something for the heads here, hooking us up with f-f-f-fresh reissues of Eric B & Rakim's four iconic studio albums. A year after the Long Island duo made their debut with the iconoclastic "Paid In Full", they returned with another full length "Follow The Leader". Eric B's beats are tougher, tighter and more developed, still break driven but bearing the same aggressive sample style as contemporaries Public Enemy. Rather than a study in biting, Eric makes the style his own, and throws down the gauntlet to any beatmakers with the diverse and dope instrumental cuts on offer. Fearless on the mic, Rakim put down a major marker for his future GOAT credentials with a frankly flawless lyric sheet. Dark and heavy shit from the heart of NYC!

Eric B & RakimPaid In Full

Eric B & RakimDon't Sweat The Technique

Various ArtistsBack From The Grave Volume 1